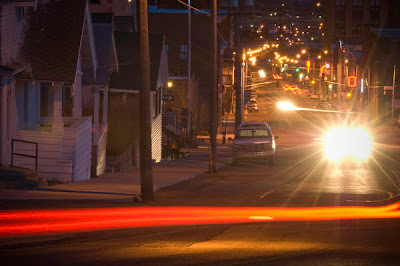 So, obviously I have a thing for night shots. It’s fun, it’s creative, and you don’t have to get up early. Well, you could get up early and get the same shot, except nobody is really driving around at 4 a.m. Well, maybe a few people who have really early jobs.

I’m actually considering starting to get up early before sunrise to get some architecture shots. That way there aren’t parked cars on the street, and I can get two “night” shots per day.

Anyway, I like this shot better than the previus traffic shots. I think it shows more about Butte. To me, the buildings and the hill are much more characteristic of Butte than I-90. You can get a similar shot to my I-90 photo almost anywhere, but not everywhere has the architecture of uptown Butte.