Everyone in Butte knows that a huge storm passed through today. The rain was hard and the wind was harsh. To me it came out of nowhere, since there was blue sky earlier in the day. Anyway, as the rain pelted the streets I knew there would be some massive puddles to photograph. I went home, did some cleaning, and went out to eat with my parents. By that time the rain had stopped. I set out to photograph, but decided to stop by the Depot to pick up some Eric Church concert tickets for some friends and myself. The entrance is on the south side, so I didn’t see this reflection until after I drove around the block.

For some reason I just couldn’t seem to align the photo strait, so that the perspective looked correct. That was a good thing, since the lighting changed from mediocre to great when the sun shone through the clouds. It gave the building a nice yellow glow, while also making the building brighter compared to the alley walls and sky. At the end of this post I show the difference about 5 minutes made in the lighting. 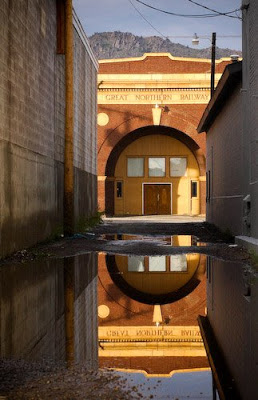 Before the clouds p

: After the clouds parted: