This photo is of the Anselmo Mine at about 7:40 p.m. The Anselmo is on the northern end of Excelsior Street on the east side of the road.

When I pulled up to the dirt parking area it was already pretty dark. I grabbed as much gear as I could carry (tripod, camera, light stand, power pack, light) and trekked down the walking path past the trains and to the mine.

It was kind of interesting…one of the buildings is hosting the more than 100 dogs that were rescued by the animal shelter from a man traveling through Rocker in a bus. So I was listening to huskies barking at each other, and I’m sure it didn’t help that I was popping off a powerful light as fast as the power would recycle (about every 4 seconds) during minute-long exposures.

I was lifting the light as high as I could over the fence, trying to avoid too much light on the fence and not enough on the buildings. You can see near where I was standing by the bright spot on the right of the photo…If my arms were only a foot longer I could have avoided that! But that would look funny…

The clouds were moving at a decent speed, which you can see from the blur during the long exposure. The moon was shining above the clouds, and lit up the sky behind the clouds giving it a blue-sky appearance. The clouds reflected the orange of the city lights. 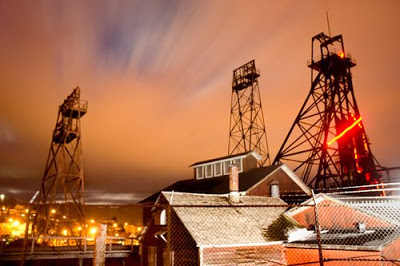