I pulled over next to Centennial Concrete (on Centennial Street, Front turns into Centennial at Montana St.) and jumped out with my gear. I started near the road, then moved forward about ten feet at a time to get the next shot. I went through that about 4-6 times, each time thinking, ‘ah, a little close won’t make the difference between trespassing or not.’ In the end I was probably about ten feet from the equipment. There was no fence, just a snow-covered lot. So I’m pretty sure I was OK.

Would I have been standing there in the middle of the day? NO! I was right in the middle of a pair of vehicle tracks. And I’m sure they don’t use little compact cars there…more like monster trucks….

OK probably not that big. But I would have gotten flattened.

Anyways, enjoy. I’ve been feeling like I’ve been stuck in a rut as far as quality of photos have been, and think this is one of the better ones of the month. 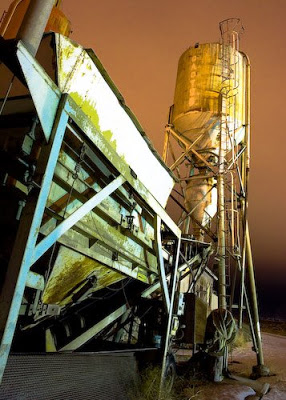