I photographed the exterior of the trolley last week, and today Denny Dutton let me in to photograph the interior. I was happy with my exterior shotslooking in the partially opened door, but am gracious to Denny who let me capture these photos. He told me that before the Butte-built trolley was stationed at the Pit Viewing Center it was a hot dog stand in Missoula. Of course years after it transported Butte natives around town.

The trolley is one of those things that looks seemingly boring to photograph when you drive by. If you read my other post about the trolley you will see that I was pretty skeptical about stopping and thought twice about continuing to photograph it. But its color, symmetry and artifacts kept me interested. I was inside about 15 minutes during this shoot.

The images could be considered over-exposed if you were to look at it from a technical perspective. But that’s kind of the point. I exposed for the shadows and midtones, keeping full detail in those areas and blowing out the highlights. If I would have exposed for the highlights (the detail outside) the inside would have been far too dark. I could have met somewhere in the middle, but that still wouldn’t have been satisfactory.

The second photo is in the front of the bus (past the doors you see in the first photo). The levers you see contain the break, pressure gauge and speed. What you don’t see is the little worn knob on the floor, that when tapped issues a high-pitched ringing (the bell).

The last photo is part of the decoration on the ceiling. 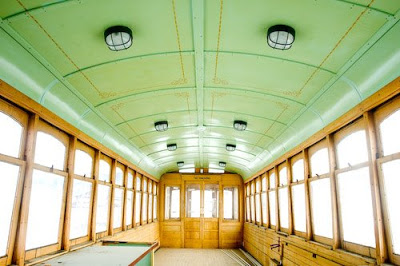