I hope the residents at the Mueller Apartments didn’t think I was too creepy for taking photos of the building. This is the front entrance on West Granite Street. I wish I would have taken an overall shot of the building, as it is pretty interesting. Maybe I’ll post a photo like that another day.

Robert, a friend of mine, suggested I take photos of this building today after I was having troubles thinking of a photo idea. If anyone else has any suggestions of good locations around Butte I’d be happy to give them a try.

When I got back into my car to leave the area I realized I had made the same mistake I have done multiple times in the past month. I parked on a hill, in the snow, pointing up the hill rather than down it. My car is a 1998 Pontiac Bonneville, and it’s kind of a boat. It wasn’t going anywhere. So I backed into a driveway and had to gun my car a few times before it would make it out of the driveway. 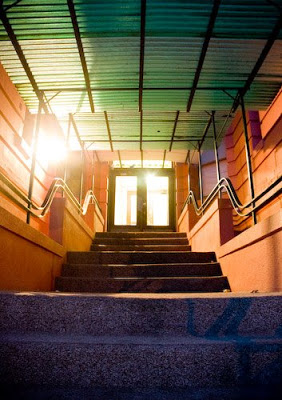