An airplane crashed into the

near the Bert Mooney Airport today. You can read more details at the

web site. So far the news says 16 or 17 people are dead, 12 of which are children. The flight plan was to land in

but that changed to Butte somewhere along the line. The plane was initially from California and the people were going on a skiing trip.

Like I said, read the Montana Standard or read it on CNN, some of the details may have been confirmed differently and I only know a brief amount about it.

You can’t see the plane from the photo. I tried viewing the accident from the north, from the south and from the west, but had no luck. It turns out the plane dug itself a 20-foot-deep hole.

The traffic trying to get to/from the scene of the accident: 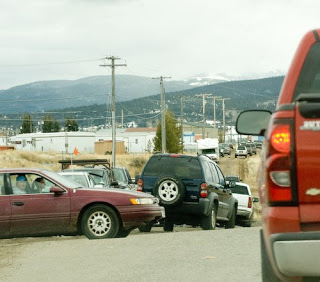