When you’re in an old mine and someone tells you not to step in a certain pile of dirt, you don’t.

Or so I learned from a near near-death experience. At the bottom of this 4-story ladder I stepped on the board I was told to. On the way back up one of my feet went onto the pile of dirt it wasn’t supposed to. My foot sank about a foot and I realized how lucky I was I didn’t put all of my weight on that foot. OK so maybe it wasn’t as near death as I made it out to be. But Logan (shown here) did tell me it might not be a big deal if I fell through. It was only 10 feet to the water, but it might be hard to swim with all the rubble.

This is Logan Dudding, an underground mine tour guide at the World Museum of Mining. He led me through the under ground for about 2 hours in the cold, and hung on to this ladder for about 10 minutes while I set up the shot and got it just right. Oh, did I mention he went up and down it about five times for the shot at the bottom? Logan, I can’t thank you enough.

The second photo is a time-lapse photo of about 25 seconds. I had him walk around the area while I moved my flashlight around the room. 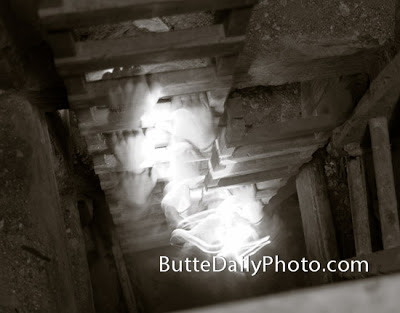